I’m always up for a challenge, so when I discovered children’s author Vivian Kirkfield’s blog Picture Books Help Kids Soar and her 50 Precious Words contest, it immediately appealed to me. The challenge–as you would have guessed by the title–is to write a complete story (for children) in 50 words or less. Interesting, right? Well, I’m up to my elbows in pastel, but I had to “take off the latex gloves” and give it a whirl. Here goes!

Anita-Alexa awoke with a plan,

Turquoise above bright as a stone,

Cactus her guide as she journeyed alone.

Flora, fauna and bramble so lush,

Silver the moon, scarlet the dusk.

Anita-Alexa let out a yawn,

Where prairie dogs whispered and guarded the dawn.

If you’re a children’s book writer, this is a wonderful opportunity to play with words and hone your writing skills.  For more information check out Vivian’s blog: https://viviankirkfield.com/2017/02/15/50-precious-words-writing-challenge-is-almost-here/

If you’ve ever worked in pastel you know you can never have enough space to work!

The good news: I recently received some cool art supplies for Christmas! Blue Earth pastels in warm and cool violets and neutrals, a wood box to organize them by value, a sturdy clip-on daylight lamp, and an assortment of delicious papers to experiment with.

The bad news: (Mostly for my family and friends,) I have temporarily relocated to my kitchen counter where I can spread everything out.

YES!  I’ve gone full circle and am once again working in pastels and I have to say, it’s been a wonderful adventure. This is due in part to my instructor Jane McGraw-Tuebner.  Not only is she an award-winning pastel artist, but also, a former art director I had freelanced for (back when hair mousse was all the rave!) We recently became friends on FB and after all this time, it turns out she lives five minutes from me! Life is certainly full of surprises.

I was so nervous during the first workshop. Terrified I’d fail miserably at pastel 1.01, I had to keep reminding myself, “Wait! You illustrated a picture book in pastel for Rizzoli Publishers!” Still, I was visibly shaken as I slipped that first pair of latex gloves on.

But that all changed very quickly. Jane had me start on a still life in two different styles. One drawing was done in pastel directly on the charcoal paper and the other, I brushed a layer of pastel with turpenoid. (Turpenoid melts the color to the paper, and as you brush it in a painterly fashion, it gives you an interesting surface to work on once it dries.) By the end of the first workshop, I had learned a number of techniques. I couldn’t wait to get back to my studio (Oops! I mean kitchen.) I was anxious to get started on a few illustrations I had originally planned to do in watercolor and colored pencil. 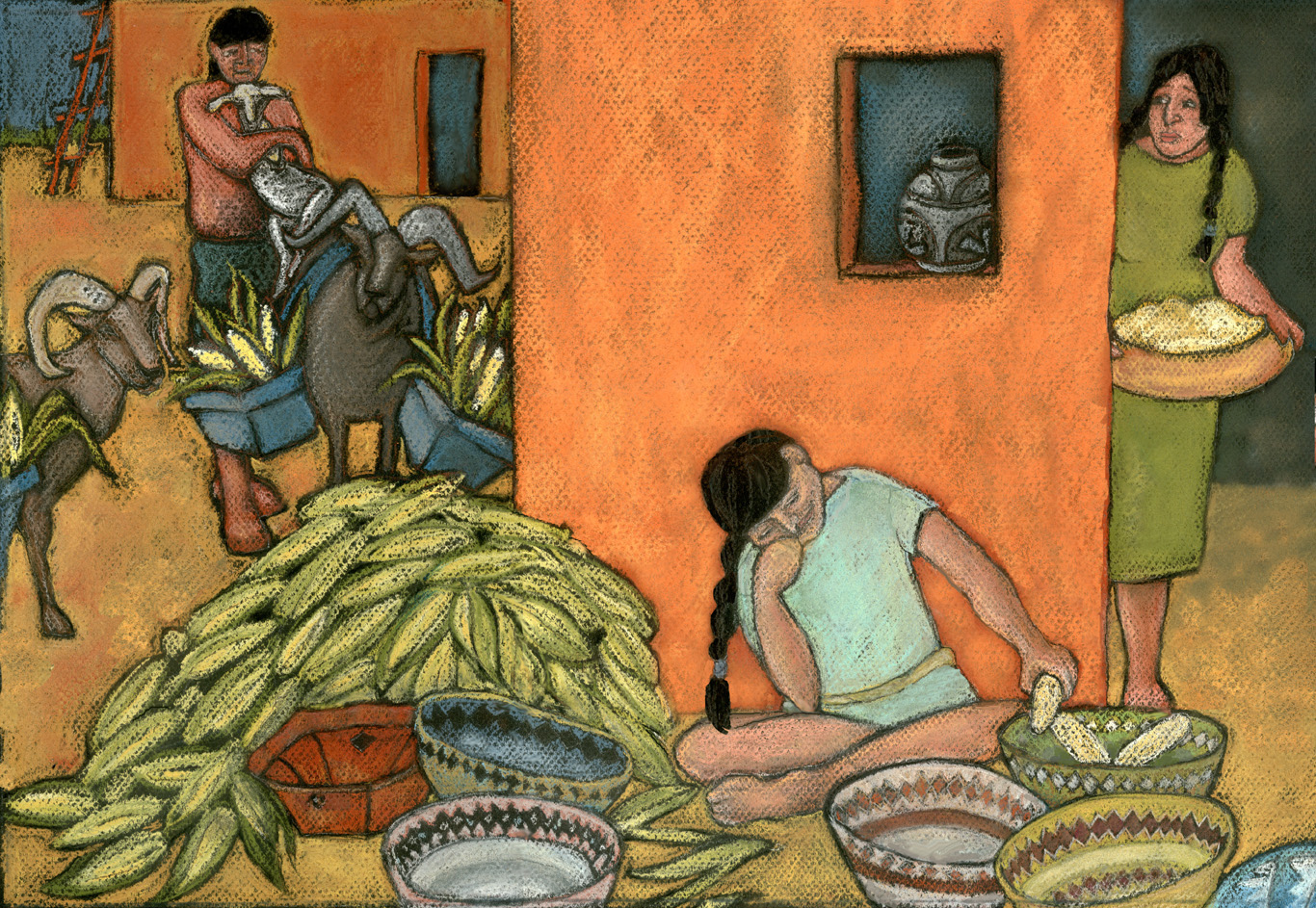 Illustration from “Ravita and the Land of Unknown Shadows,” written by Marietta Abrams and Peter Brill, Rizzoli Publishing

What I love about pastel is that it can be manipulated like paint. It’s very forgiving, which is great because it gives you more flexibility to play, (and make mistakes.) What’s really interesting is that it has a warmth to it— maybe its the texture of the paper, or the velvety quality of the pastel, but for me, it seems to evoke more emotion. Either way, I’m in pastel heaven, playing with colors and textures, experimenting with papers, pushing the limits of what I thought was possible with what will often just magically appear with a simple stroke!

The bad news: I need to expand my studio. (The chef wants his kitchen back!)

Don’t laugh! I grew up in a house with 21 cats, 2 Chinese Pugs, and a lizard I named Queen Elizabeth, (this made perfect sense at the time.)  I used to be able to close my eyes and recite all 21 pussycats by name. Tiger, Smokey Joe, Monkey Doodle, Even, Steven and Odd, were just a few of the kitties who’d spend their days lounging on the living room sofa or hunting through the tall grass of our backyard on one of their afternoon safaris.

I’ve always been an animal person. Growing up around such diverse personalities, I became attuned to their quirky, mysterious ways. I’d spend hours sketching them as they’d perch on the windowsill, or curl up on the floor in that small patch of sunlight that shot through the window.  They were great subjects—up until the moment they suddenly needed to dart down the hallway for no apparent reason.

My friend Bob’s beagle, Ruby was the inspiration behind the illustration of the dog, duck and teddy bear gawking at the array of desserts. Sadly, she just passed away, but in her short life she proved herself to be a most determined pup. I loved Ruby. Never one to accept defeat, she was always, ALWAYS working on a new angle to reach that forbidden cookie sitting on the kitchen counter. I felt her pain.

Ruby was remarkably photogenic, so when Bob sent me a few photos, her dark brown eyes burning their way into my heart, I couldn’t resist drawing her. The sketches inevitably led to more sketches with Ruby and a few accomplices. I began drawing them in different scenarios: hiding under the covers in a thunderstorm, gazing out the window as an ice-cream truck whizzed by. I finally decided on the dessert display. I thought there was something delightful about a table filled with cupcakes, cookies, and a mile-high cake!

For me, it’s so important to connect with whatever I’m drawing. Whether it be a cake, a cat readying to pounce, or the delicate wisp of a dandelion as it floats away —you almost have to become the thing you’re drawing while your pencil glides across the paper.

In college, I had been searching for the perfect piece of Haiku to complete a book of linoleum prints of flowers I was working on. I found one that still resonates all these years later.

The moon’s the same old moon,

The flowers exactly as they were,

Yet I’ve become the thingness

Of all the things I see.

It’s a marvelous exercise really—whether you draw, write, sing or act. Empathy is as important a tool as your pencil. Consider it an integral part of the creative process.

So draw what you love and become “the thingness” of all the things you see! It might just leave you feeling a little better about yourself, and the world!

Welcome to Our Blog! Please check back often as we’ll be updating often