Misadventures of a Magician’s Son 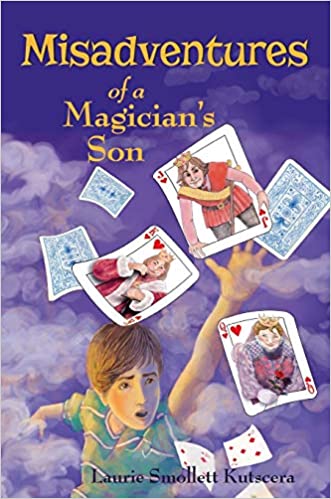 There’s nothing like a little magical escapism to chase away the bad news in the world. Middle school is hard enough, but more so for Alex. He’s in a new town after his famous magician father passed away attempting to create a new trick. When Alex discovers a magical deck of playing cards his dad left him, the adventure begins and what he knows about magic changes forever.

The story is fast paced and frequent illustrations by the author add to the appeal. The royal family of hearts comes to life, but only Alex can communicate with them. That is until he misplaces the deck. His ways of dealing with the crisis are sincere and kid like. The fictional small town of Orchard, Maine is the setting Alex despises as it is quite the change from growing up in his home state of New York. Filled with magical surprises and a thrilling ending, the book would appeal to any girl or boy—along with a few of us older MG readers. There’s also a hint on the final page of what would be a welcome sequel.

MISADVENTURES OF A MAGICIAN’S SON

1. The joker in the deck will cause a smile or two as you read.

2. The 27 chapters (each announced with accompanying cards from the magical deck) were the perfect length for a read-aloud.

3. Mom pretty much stays aside for the story and keeps the young characters in the forefront.

4. Magic lovers might be inspired to get there own deck of cards. There weren’t any sources in the back pages but I can recommend an oldie but goodie: The Kid’s Guide to Magic Tricks.

5. The small town setting was nicely woven into the story. Big city kids might be surprised at the differences.

ABOUT THE AUTHOR  (From Blue Whale Press)

Laurie Smollett Kutscera was born in Greenwich Village and grew up in Queens, New York. At the age of 11, she performed her first magic trick and was destined to be a ventriloquist with the aid of her childhood friend, Neil, who today is a real magician! But rather than follow in the footsteps of Houdini, she went on to study fine art and children’s book illustration at Queens College with Caldecott medalist Marvin Bileck. She is an award-winning graphic designer, a published children’s book illustrator, and toy designer.

Laurie’s passion for writing began 12 years ago while cruising the eastern seaboard from Nantucket to the Virgin Islands. Today she continues to write and illustrate and is currently working on several contemporary picture books and middle grade novels.

Laurie lives on the North Shore of Long Island with her husband Nick and rescue doggie, Cody. You can learn more about Laurie by going to lskillustration.com.

Great review! Congratulations. It sounds like a fun book! Wishing you all the best!

Thanks so much Stephanie!