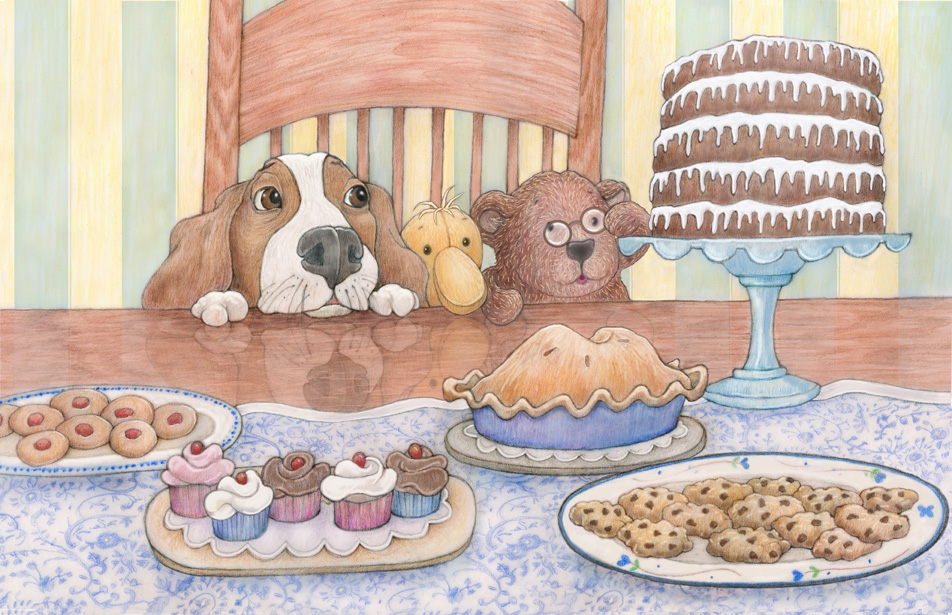 Don’t laugh! I grew up in a house with 21 cats, 2 Chinese Pugs, and a lizard I named Queen Elizabeth, (this made perfect sense at the time.)  I used to be able to close my eyes and recite all 21 pussycats by name. Tiger, Smokey Joe, Monkey Doodle, Even, Steven and Odd, were just a few of the kitties who’d spend their days lounging on the living room sofa or hunting through the tall grass of our backyard on one of their afternoon safaris.

I’ve always been an animal person. Growing up around such diverse personalities, I became attuned to their quirky, mysterious ways. I’d spend hours sketching them as they’d perch on the windowsill, or curl up on the floor in that small patch of sunlight that shot through the window.  They were great subjects—up until the moment they suddenly needed to dart down the hallway for no apparent reason.

My friend Bob’s beagle, Ruby was the inspiration behind the illustration of the dog, duck and teddy bear gawking at the array of desserts. Sadly, she just passed away, but in her short life she proved herself to be a most determined pup. I loved Ruby. Never one to accept defeat, she was always, ALWAYS working on a new angle to reach that forbidden cookie sitting on the kitchen counter. I felt her pain.

Ruby was remarkably photogenic, so when Bob sent me a few photos, her dark brown eyes burning their way into my heart, I couldn’t resist drawing her. The sketches inevitably led to more sketches with Ruby and a few accomplices. I began drawing them in different scenarios: hiding under the covers in a thunderstorm, gazing out the window as an ice-cream truck whizzed by. I finally decided on the dessert display. I thought there was something delightful about a table filled with cupcakes, cookies, and a mile-high cake!

For me, it’s so important to connect with whatever I’m drawing. Whether it be a cake, a cat readying to pounce, or the delicate wisp of a dandelion as it floats away —you almost have to become the thing you’re drawing while your pencil glides across the paper.

In college, I had been searching for the perfect piece of Haiku to complete a book of linoleum prints of flowers I was working on. I found one that still resonates all these years later.

The moon’s the same old moon,

The flowers exactly as they were,

Yet I’ve become the thingness

Of all the things I see.

It’s a marvelous exercise really—whether you draw, write, sing or act. Empathy is as important a tool as your pencil. Consider it an integral part of the creative process.

So draw what you love and become “the thingness” of all the things you see! It might just leave you feeling a little better about yourself, and the world!

I love your blog already! Your voice makes me happy and your topics so uplifting — and the art! Thanks for the feast!

Thank you Mar. I’m so glad you like it.

So sorry to hear that Ruby has gone. I know your friend Bobby adored her. I love that you have kept her in your heart and kept her hopeful anticipation in your illustrations as she looks forward to her next treat opportunity. Your are an amazing camera of the heart as your pencils demonstrate. Don’t ever lose that wonder you perceive in the beauty around you! Love you and your work!

Laurie,
I enjoyed your perspective on life and your connections. I feel the same way when I photograph certain things. I think it shows in the work when the artist become the thingness. Keep the passion.
Tom

You’re absolutely right Tom. You can always tell. Passion is key! It seems to run in your family!

So wonderful. What a pleasure to read. I look forward to the next installment.